"The Father of Industrial Medicine" and the occupational health of medical professionals in early modern Italy.

We often focus on treatments offered by medical professionals in the past, but what of the occupational health of the practitioners themselves? Italian physician Bernardino Ramazzini (1633-1714) spent most of his career studying the diseases of medical professionals and other workers during the 17th century. In 1700 his life’s work was published, De Morbis Artificum (Diseases of Workers). It was the first comprehensive study of occupational diseases and quickly became a standard text in Western medicine, eventually earning him the name, ‘The Father of Industrial Medicine’. He wrote very much to the point and filled his text with fascinating, and sometimes frightening, anecdotes! Here are just a few of his observations on the dangers faced by early modern men and women in their medical work.

Ramazzini considered doctors to be among the most fortunate when it came to avoiding ill health in general, ‘it is as though their profession gave them special privileges’. Apart from the risk of hernia from climbing too many stairs, or a bout of dysentery from taking in a foul miasma at the bedside, the clinician’s lot was a happy one. Ramazzini only observed prolonged ill health in doctors when everyone around them was healthy. Clearly there could be nothing better for a physician’s constitution than sickly, fee-paying patients! 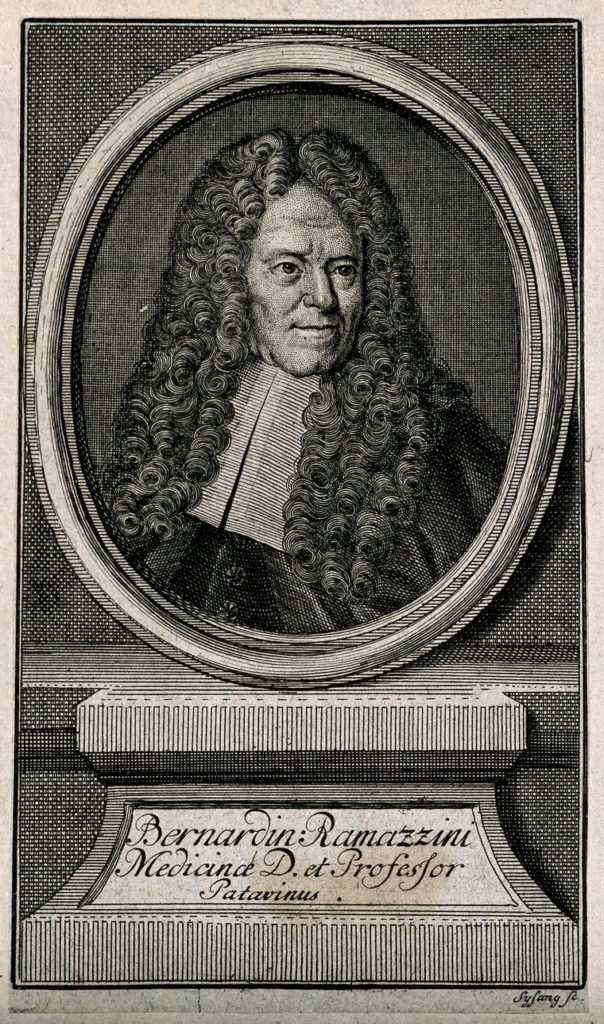 Perhaps Ramazzini was teasing his contemporaries, but in contrast to the apparently dastardly physicians were the women who helped to bring healthy new lives into the world. The specific dangers midwives faced were from the ‘malignant and poisonous quality’ of the ‘uterine flux’ or lochia (the bleeding experienced by women after giving birth). Ideas of injurious matter present in women were connected to some early modern beliefs in the toxicity of menstrual blood, which were derived from the texts of ancient writers such as Hippocrates and Galen. Heavy reliance on ancient medicine was in decline with the growing popularity of anatomical dissection during the period, but some practices persisted. Ramazzini refers to surgeons who avoided the use of wound dressings made from ‘the sheets or underclothes of women … however often they may have been washed’. These could also have been the same surgeons who kept menstruating women away from anyone with an open wound because of the ‘poisonous quality’ of menstrual blood! Ramazzini regards these practices with scepticism, but he is adamant that the lochia could do damage to the midwife’s hands and arms, ‘from the dripping lochia they suffer such serious injury to their hands that these sometimes become inflamed and ulcerated by that corrosive, acrid matter’. The corrosive, acrid matter Ramazzini refers to was most likely syphilis passed from infected mother and baby to midwife through direct contact with the lochia. Venereal disease posed one of the greatest threats to early modern medical women. Wet nurses could also contract syphilis from suckling babies (or pass the disease to the child). A midwife’s best protection was to wash her hands in vinegar and water then wrap them in linen before attending the mother. Many midwives recognised the benefits of cleanliness and barrier protection during childbirth long before any comprehension of modern germ theory. Sadly, these preventative measures would not be adhered to by the accoucheurs (man-midwives) and obstetricians who followed during the 18th and early 19th centuries. 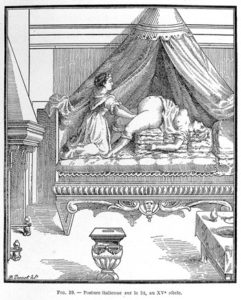 Barrier protection would have also been useful for apothecaries! Preparing natural and chemical substances by hand could lead to all sorts of nasty side effects. The preparation of laudanum with opium could induce ‘stupor and lethargy’. Ramazzini’s recommendation was drinking vinegar. Good for reviving apothecaries, perhaps, but not so good for their teeth! Things could be much worse, however. The preparation of cantharides (ground, dried Spanish fly beetles) was particularly dangerous for the liver and kidneys if inhaled or touched with unprotected hands. Ramazzini recommended the removal of the spine-covered head, feet and wings before pounding, and drinking ‘emulsions of melon seeds; whey also and plain milk will be found very helpful for reducing the heat of the urine’.

Plants could be even more harmful than insects. Inhaling bruised colocynth – a desert vine bearing hard, bitter fruit – caused colic and severe diarrhoea. That sounds unpleasant enough but handling arum root could be downright deadly. Arum root is a woodland plant also known as cuckoopint or lords-and-ladies. Ramazzini describes an incident in which an apothecary held the plant before touching his genitals (we do not find out exactly why). His genitals ‘became so violently inflamed that gangrene resulted and a haemorrhage so acute he nearly died’.

Smells were not quite so catastrophic on the body, but they could still pack a punch! Even pleasant smells could be hazardous, like the infusion of roses for medicinal syrups which brought on headaches and diarrhoea. Ramazzini treats readers to an anecdote from Portuguese physician Gaspar de los Reyes Franco (17th century) in which a fisherman visiting the court of King Sebastian was so overcome by the fragrant perfumes used there (possibly to mask more unpleasant odours) that he fainted and was revived by being carried ‘to the sea and rolled in seaweed and wet sand, by which means, like a sow that wallows in the mire, he was marvellously restored’. A marvellous remedy indeed, but probably not something to try on the banks of the Thames.

Despite the many hazards negotiated by apothecaries, there was one life-threatening task performed by a specific type of practitioner which earned Ramazzini’s intense disgust. These practitioners, ‘the lowest class of surgeons who carry on the business for the money to be made’, administered mercurial inunctions to syphilitic patients. In other words, they rubbed mercurial ointment into patients’ skin, wrapped the patients tightly in blankets and sat them by a blazing fire to ‘sweat’ out the disease. The surgeon often suffered the same side effects as the patient from inhaling or ingesting mercury, including excessive salivation, throat ulcers, palsied hands, blindness, vertigo, colic and diarrhoea. Ramazzini observed that wearing leather gloves couldn’t even prevent the ointment penetrating the skin. Some surgeons had the foresight to instruct the patient to rub the ointment into their own skin. For others, however, preventative measures were useless. Ramazzini recommended guaiacum to counter the effects of ‘hydrargyrosis’ (mercury poisoning). Guaiacum, also known as guaiac or Holy Wood, came from the New World and was used as a natural alternative to mercury or to lessen its side effects, ‘guaiacum … has the power to disperse the mercury and also it provokes sweat’. Despite the obvious dangers which mercury posed to patients and practitioners, there was no other treatment for syphilis effective enough to replace it completely. Ramazzini’s own recommendations included courses in both mercury and guaiacum. Here are his final words on the subject, ‘First guaiacum engages the enemy Gallicus morbus [French disease] with a skirmish, so to speak, and weakens it; next mercury comes to closer quarters; finally, guaiacum comes in again to kill the enemy and finish off the stragglers.’ 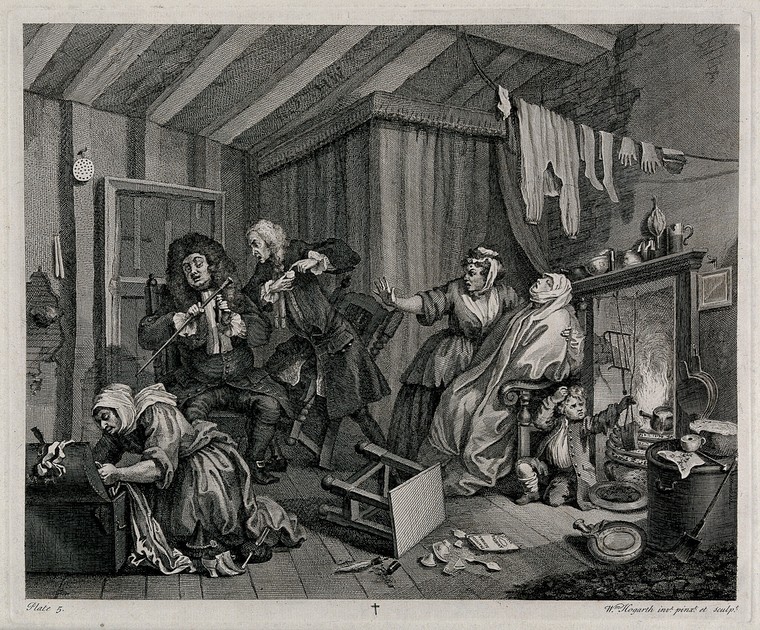 About
Vanessa Sanderson is a social media volunteer at the Old Operating Theatre Museum and Herb Garret. She also volunteers at several archives in Kent and writes medical history articles for a local history journal. When not a volunteer, Vanessa is a freelance copywriter and proofreader, and an MA student of Medical Humanities at Birkbeck, University of London. Find Vanessa on Instagram @a_curious_archive.

“Doctors Get Ill Too”