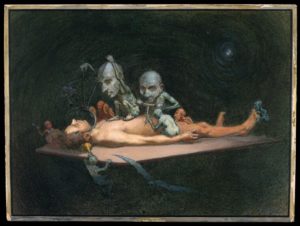 ‘Will I wake up during my operation?’

‘Will I wake up after my operation?’

‘Will I be the same when I wake up as I was before?’

These are some of the questions patients have about anaesthesia. In this talk we’ll explore historic accounts of surgery before anaesthesia before discovering the common fears and myths which surround anaesthesia, which ones are real and which are myths, and find out what anaesthetists do to mitigate the real ones.

Our speakers for the night will be:

Maria has worked in the NHS throughout her professional career and spent 34 years as a consultant anaesthetist at Epsom General Hospital. She was a Member of Council of the Royal College of Anaesthetists, and ultimately Senior Vice-President. Thereafter, she held the post of Clinical Quality Adviser to the College. She has always had an interest in patient information and patient safety, and currently works as a GMC Associate. Most of her publications have been concerned with standard setting, quality assurance and safety and she is the author/ co-author of several national guidelines.

Dr Michael Barnett: Michael was appointed a consultant at Guy’s Hospital in 1974 and retired in 2007 where he had roles in the development of the adult and the paediatric intensive care units. Michael had a special interest in paediatric anaesthesia, especially for renal transplantation and paediatric cardiology. He was Director of the Anaesthetic Department at Guy’s and St Thomas’ for four years.

Archie is a former naval officer, a commando helicopter pilot in the Fleet Air Arm. His career in the Royal Navy was cut short by a life-changing injury, but after a lengthy recovery period, he was able to resume a civilian aviation career.

Since retirement he has been actively involved in the health sector. He was a member of the Patients Liaison Group at the Royal College of Anaesthetists and a charity trustee at the Association of Anaesthetists of Great Britain and Ireland. He was also the lay member at The Society for Ethics and Law in Medicine and the public/patient voice at the National Safety Standards for Invasive Procedures.

The talk will be followed by a Q&A from the public.

*All income from ticket sales go to support the upkeep of the museum and the collection.