Ordinary: A play based on the true story of the medium Helen Duncan 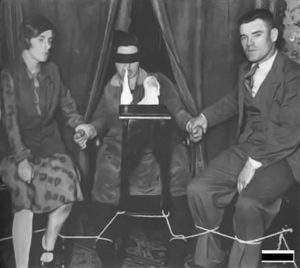 The extraordinary story of an ordinary woman is brought to life at The Old Operating Theatre Museum. Ordinary explores the many questions that surround the mysterious life of Helen Duncan (Nelly) a middle aged, working class woman considered of low intelligence. Could this one woman really be a threat to national security during the second world war? Was she a German spy, a dangerous witch, or just a common fraud? What was so dangerous about her practise that finally led to her imprisonment in Holloway prison in 1944? The practise of Seance and Spiritualism was revered by many and exonerated by men such as Arthur Conan Doyle. During the paranoia of wartime it was considered an immoral and illegal practise for women. Helen’s belief was publicly tested and assessed by the paranormal psychic researcher and author Harry Price. Both Helen and Harry became tabloid sensations overnight. Ordinary tells the tale of Nelly from her early life in 1905 to the tragic HMS Barham incident in November 1941 and the infamous trial that later followed at The Old Bailey. Come be a witness to Nelly’s story and make up your own mind to whom you think she really was? Victim or perpetrator? Or something more extraordinary and indefinable that science cannot always explain. Come be the Judge and Jury and decide. Storytelling, singing and physical theatre are beautifully merged in Ordinary. A unique experience designed in collaboration with The Old Operating Theatre, celebrating the unheard voices of those who often get forgotten. Now is the time to listen.

The performers:
“Pitch Perfect” Bespoken are a female-led theatre company. Delving into the darker elements of Her-story. We explore unknown tales that are based on fact, fiction and folklore. Our aim is to shine a light on women’s voices unheard past and present. To give a fresh and open perspective on what it is to be female, cast in a time confined by expectations of gender, class, race, status and social behaviour. We are currently creating a trilogy of scripted and devised plays that explore women’s mental health, crime and media exploitation. Beginning with the story of Helen Duncan, the last woman to be imprisoned in Britain under the Witchcraft Act in 1944. Bespoken Theatre are also the resident theatre at the Bethlem and Maudsley Hospital School and work closely with young people creating theatre performances and scriptwriting sessions. Our backgrounds are a unique combination of performance, alongside teaching and facilitating in mental health,we are developing more projects in other specialist provisions. We want to share and celebrate stories that have not been heard before. Exploring people’s lives past and present, giving voice to those who were and still are denied an opportunity to speak. Www.bespokentheatre.com

This play will have two runs: One on the 12 November and the second one on 13 November.

Book Tickets
Ordinary: A play based on the true story of the medium Helen Duncan