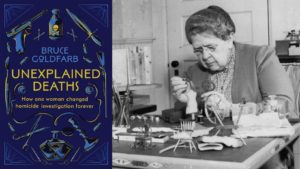 Join us from the comfort of your home while we take you on a fascinating journey to learn about the true story of Frances Glessner Lee, the woman who changed forensic science with her doll-house-sized crime scene dioramas. Our conversant will be Bruce Goldfarb who has just written a book about her.  Bring your questions along for the Q&A!

Unexplained Deaths details the true story of Frances Glessner Lee and her revolutionary work in forensic science through the creation of the Nutshell Studies of Unexplained Death, a series of dollhouse-sized crime scene dioramas that she used to teach homicide investigators. Born a socialite to a wealthy and influential Chicago family, Lee was never meant to have a career, let alone one steeped in death and depravity. Yet she became the mother of modern forensics and was instrumental in elevating homicide investigation to a scientific discipline. She learned forensic science under the tutelage of pioneering medical examiner Magrath. A voracious reader too, Lee acquired and read books on criminology and forensic science – eventually establishing the largest library of legal medicine. Lee went on to create The Nutshell Studies of Unexplained Death – a series of dollhouse-sized crime scene dioramas depicting the facts of actual cases in exquisitely detailed miniature. Celebrated by artists, miniaturists and scientists, they were first used as a teaching tool in homicide seminars at Harvard Medical School in the 1930s, subsequently becoming an integral part of the longest-running and still the highest-regarded training for police detectives of its kind in America. In Unexplained Deaths, Bruce Goldfarb weaves Lee’s remarkable story with the advances in forensics made in her lifetime to tell the tale of the birth of modern forensics.

Bruce Goldfarb is an award-winning writer whose work has appeared in the Baltimore Sun, Washington Post, USA Today, Baltimore magazine, American Archaeology, American Health and many other publications. Since 2012 Bruce has served as executive assistant to the Chief Medical Examiner for the State of Maryland. He is public information officer for the OCME and curator of the Nutshell Studies of Unexplained Death. His first book of popular nonfiction, 18 Tiny Deaths: The Untold Story of Frances Glessner Lee and the Invention of Modern Forensics, was released by Sourcebooks in February, 2020.