Much of our knowledge of the organs inside the human body has developed from the dissection of dead human bodies, a practice that was first developed in Europe by ancient Greek physicians in the 3rd century BC. Dissection then fell out of use in the West until the Renaissance, when its revival led to significant advancements in our understanding of human anatomy and medicine. However, for many centuries, the anatomists’ dissection room was greatly feared, and in some cultures, the dissection of human bodies remains prohibited. 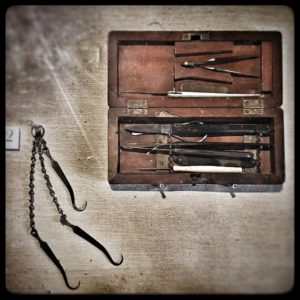 This small rectangular wooden case contains two hook locks and a loop catch to its front edge and is fitted with a slotted rack to hold the instruments. The kit includes three scalpels; a simple steel rod with a slight waist to the handle where the iron spike begins; a long flat steel blade that opens from a hinge inside a case that also acts as a handle; a smaller steel blade with a round flat end; a small steel screwdriver with a loop-like handle; three steel chains hanging from rings with a hook on each end; and three glass tubes and pipes. These instruments have handles made from ivory, ebony or tortoiseshell.

This pocket case of dissection instruments probably belonged to a medical student at St Thomas’ Hospital. A medical school was established there in 1550, which continued to teach across St Thomas’ and Guy’s Hospitals until 1825. In 1982, St Thomas’ Medical School remerged with that at Guy’s to form the United Medical and Dental Schools of Guy’s and St Thomas’ Hospitals; this merged in 1998 with King’s College School of Medicine and Dentistry. Although St Thomas’ Hospital remains an active site of medical training, its students today are unlikely to be purchasing ivory or ebony dissection kits. Students have long used simple sets of instruments to dissect plants and animals, beginning with biology and botany.

Each instrument in a dissection set was carefully chosen so that the kit would be fit for a learning amateur to reveal the internal structures of the human body. For example, medical students would have used scalpels and forceps to cut back the skin, chained hoops to hold the skin back and open, and blowpipes to inflate structures such as the intestines to make them easier to see. Compared to surgical instruments of the same period, dissection sets did not allow work as careful and specialised as would be required on a living patient. Therefore, the number of instruments was noticeably smaller and used for more purposes, as many different instruments of the surgeon were dedicated to a single function, such as peeling away layers of the body to reveal its internal workings.

The concept of pathological anatomy is based on the doctor looking inside the human body for signs of disease on the organs to confirm their diagnosis from external symptoms with internal changes. This observation could typically only happen if the patient had died and an autopsy was performed on lesions, traces of disease on the body’s organs. However, examining patients’ bodies in this way after death was generally considered unacceptable and problematic when well-off patients received treatments and died at home.

Performing autopsies became much more common when hospital medicine became the mainstream. Staying in a hospital in the early 19th century meant a high chance of death. Hence, doctors had many opportunities to collect evidence from multiple cases of the same disease to know that one internal lesion could cause specific symptoms. Hospital medicine before the French Revolution was a charitable act under the organisation of the Church. In the early 19th century, most patients in the large Parisian hospitals were poor and desperate. Unless their bodies were claimed by families when they died, the hospital took charge of the body, allowing doctors to study the symptoms of a disease after death. Thus, in hospital medicine, doctors could focus on observable signs of illness on the body rather than the patient’s account of their condition to make a diagnosis.

At the same time, hospitals were no longer just places that cared for the sick – they became places of learning and knowledge generation. Before the 18th century, medical students rarely performed dissection themselves. Instead, they watch an anatomy professor demonstrate a dead body at the centre of a lecture hall. As pathological anatomy flourished, physicians recognised that dissection was the key source of medical knowledge. Surgeon Robert Liston once said that “it is only when we have acquired dexterity on the dead subject, that we can be justified in interfering with the living”.

This era’s medical curricula emphasised the importance of human dissection in the training of young physicians and surgeons because it allowed doctors to approach the body and their patients with greater scientific understanding. With a small wooden box of steel blades and other contraptions, an aspiring physician could learn the essence of the human body beyond what text alone would teach. But the dissecting set was not the anatomical student’s only school supply.

A corpse was also necessary to perform dissection. The 19th-century public saw dissection as a desecration of the dead and feared it might hinder a spirit’s resurrection on Judgement Day. Because of this opposition, medical schools found they had a shortage of cadavers to use in the classroom. Many physicians resorted to stealing bodies from graves or paying hired ‘resurrectionists’ to do the same. If discovered, however, this theft could potentially result in a riot against the nearest medical institution.

The dissection kit thus took on multiple meanings beyond its role in a medical classroom. It was a tool through which Europe built a scientifically correlated base of medical knowledge and practice, and a symbol of the training received by medical students to enter the profession. Ultimately, the influence of this macabre school supply was felt widely across society. To people outside the medical community, the dissection kit represented a threat to bodily autonomy, both of religious beliefs and personal integrity.

Zhǐyù Chén is an undergraduate at Newnham College, Cambridge. After two years of studying Biology and Physics, she spends her final year reading History of Science and writing a dissertation on the British reception of Chinese medical jurisprudence in the 20th century. Follow her on Twitter @ZhiyuChenNC18.

For the Good of the Living: Dissection and Medical Education in the 19th Century
Tagged on: anatomy    autopsy    dissection    hospitals    medical students    pathological anatomy