In 1822 St. Thomas’ Hospital used over 50,000 leeches for medical bloodletting, over 31 times more than just four years previously. It is a remarkable increase in use, and one replicated across Europe which found itself in the midst of a “leech craze”. The obsession with these bloodsucking worms was founded in ancient Greece and only ended in the latter half of the nineteenth century. Understanding this seemingly bizarre fad means delving into nineteenth-century medicine and helps us to reveal the stories behind two clear glass leech jars held by the museum. 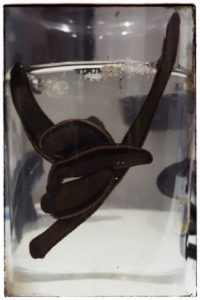 One of the greatest advocates for venesection (bloodletting) by leeches in the early nineteenth century was a Frenchman, François Joseph Victor Broussais. He claimed that all fevers were caused by inflammation of the organs, and that leeches could be used to treat these fevers by removing blood from the parts of the skin closest to the affiliated organs. Hirudo medicinalis have three jaws, and release an anti-coagulant, hirudin, which causes a continuous flow of blood for several hours after the leech has been satiated. Using a leech required precision: a leech attached to the wrong area would be painful to remove for both the patient and the leech, so leech tubes were used. The tube directed the leech to a specific point on the body and in this way the leech was made a valuable medical tool: it was effective, reliable, predictable, and controllable. Even with such advantages, the explosion in leech use was extraordinary: France was a net exporter of leeches in the 1820s, but by 1833 it imported 42 million leeches a year.  The same trend is seen in the records of St. Thomas’. In 1815 1,607 leeches were used, increasing to 10,375 in 1818. In 1823, the 54,650 leeches used that year cost the hospital £251 9s 6d, about 8% of all hospital expenditure and more than the average annual salary of a physician at the time. Broussais’s thinking may seem odd to us today, but the popularity cannot be denied. Why, though, was venesection practised at all?

We must first understand that the body was understood very differently in the nineteenth century, through a system of medicine called ‘humoral theory’. First systematised by the ancient Greeks, Hippocrates is the person usually credited with applying this theory to medicine which was later developed by Galen. Humoral theory held that inside the body there were four different fluids, called humors: blood, yellow bile, phlegm, and black bile. Though it sounds odd, there was good reason to think this. When blood is left in a container for an hour it separates into four different layers: a dark clot at the bottom (black bile), a red layer (blood), with a white layer above that (phlegm) with a clear yellow layer at the top (yellow bile) – the Greeks were just working with what they could see. Galen and later physicians determined that the humors needed to be kept in balance; too much or too little of one was understood as the cause of all disease. Each humor was associated with two qualities, either hot or cold, and either wet or dry. For example, the qualities of blood were warm and moist, whilst the properties of black bile were cold and dry. Each person had a unique balance of humors, and imbalances could be caused by a great range of things related to the respective qualities: the food people ate, the weather, even the stars. It was thought diseases that caused redness, inflammation and fever, for example, were caused by an excess of blood, and so – quite logically – the means to alleviate this ailment was to remove blood from the affected area.

Early nineteenth-century physicians, like Broussias, understood the body in essentially the same way. However, it was around this time that people began to question the value of venesection. A fellow Frenchman, Pierre-Charles-Alexandre Louis, conducted a careful study into how long patients took to recover from pneumonia after being bled, and how changing the time of bleeding affected recovery. By using (and thereby popularising) the ‘numerical method’, where medical data was derived from aggregated clinical data, he found “narrow limits to the utility of this mode of treatment”, a view he first published in 1828. There were other reasons, too, why venesection by leeches began to fall out of favour. Importantly, the popularity of the practice had driven up the price of leeches. Leeches were traditionally collected by individuals, often women, in marshy or boggy land. It was not an easy job, and William Wordsworth communicates this in ‘Resolution and Independence’ when recalling an encounter with a leech-gatherer:

“He told, that to these waters he had come
To gather leeches, being old and poor:
Employment hazardous and wearisome!
And he had many hardships to endure:
From pond to pond he roamed, from moor to moor;
Housing, with God’s good help, by choice or chance;
And in this way he gained an honest maintenance.”

George Walker’s ‘Leech Finders’ shows Yorkshire women at work gathering leeches. The gatherer would walk into marshland or bogs and allow the leeches to attach to their legs before collecting them. Other approaches involved using a small piece of meat on a stick, to which the leeches attached readily and could then be collected. This was seasonal work as in the winter the leeches were too inactive to be gathered. However, demand for leeches grew over the course of the craze, and they were needed all year round. As such they became profitable to farm. Bedale House in North Yorkshire has a unique ‘leech house’ in its grounds, a building specifically designed to keep leeches in prior to sale. Even with leech farming, doctors were continually vexed by inadequate supply. Then, in the 1850s, Louis Pasteur’s germ theory demonstrated the cause of disease was not humoral imbalance, but microscopic organisms. With rising monetary value and decreasing medical value, leeches gradually fell out of favour. The Museum holds two hand-blown clear glass leech jars from the 1860s, and therefore from the period when leeches were losing popularity. Used for storing the leeches between venesections, they are large and spherical in shape; one has a stem, and both have a large, flared rim. A muslin cloth covered the jar, which allowed air to move into the jar whilst preventing the leeches from escaping, and was secured in place with string tied underneath the large rim. As you tour the museum, look out for these innocuous jars, and see if you can stomach the thought of them wriggling with hundreds of leeches!

A hand-blown clear glass leech jar, used for storing leeches between venesections (bloodlettings). A muslin cloth, which allowed air to pass through, was attached with string over the particularly large rim to keep the leeches in place. By the 1830s it was apothecaries, not physicians, who generally bought and administered leeches, although they were also sold for personal use. At this time, Europe was gripped by a leech craze; St Thomas’ Hospital went from using 1,607 leeches in 1815, to over 50,000 in 1822, and the following year spent more than an average physician’s annual earnings on leeches, a full 8% of the total expenditure for that year. France imported 42 million leeches in 1833 alone.

Hirudo medicinalis has a three-part jaw, and the saliva includes anticoagulants and vasodilators which cause the wound to bleed for several hours after the leech is satiated and detached. This makes them a valuable tool for venesection. Eighteenth and nineteenth century humoral theory held that diseases which caused redness, for example fevers and inflammation, were caused by an excess of blood, one of the four humors, and so could be treated by removing that blood, a task leeches were especially good at. However, with leech costs spiralling due to demand and Pasteur’s germ theory gaining traction, use of leeches gradually fell out of favour throughout the nineteenth century. Despite this, the jar was made in the 1860s, so we know that leeches were still being used at St. Thomas’ at this time.

Adam Chaddock is a current MSc student in the History of Science, Medicine and Technology at Oxford University with a particular interest in nineteenth-century medicine and medical trade. This article and corresponding object description were produced as part of an internship programme with the Museum in March 2021.